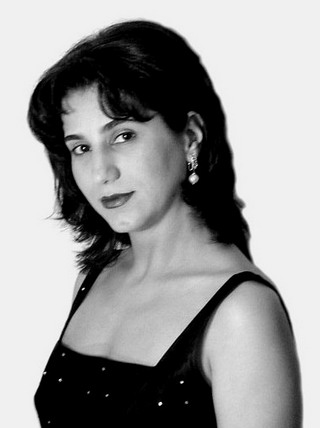 Alina Raskin is a Canadian-Armenian Soprano, born and raised in Yerevan, Armenia. From a young age, she was enrolled into an intensive music school, along with her regular academic school, which she would attend several days a week for the next seven years concentrating on the violin. At the age of 16, when she completed the seven-year intensive music school, she transferred directly into the music program at the Romanos Melikyan College, where she completed her Ba.Mus. Soon after, she would get accepted into the Yerevan State Conservatory after Komitas to complete a M.Mus.

Following her completion of her first M.Mus, she discovered a new and undying fervent love for singing and went back to complete a second M.Mus. specializing in Voice. However, being trapped in the curtain walls of the Soviet Union, Alina and her husband had always dreamt to see the rest of the world. So after a year in the Voice program, when presented with an opportunity to escape the harsh borders of the iron curtain, they moved to Israel to start a new life. In Israel, Alina met Professor of the Kiev Conservatory and Soloist of the Kiev Opera, Ella Akritova with whom she would train for the next five years. As training progressed quickly with intensive one on one training, within a single year, Alina had her debut performance in Jerusalem at the Brigham Young University. Following her debut, she would sing at innumerable events in Ashkelon and Ashdod over the next 5 years, including a last performance in “The Origins” Concert alongside Israel’s and the ex-Soviet Union’s most prized and sought-after singers and musicians (including her own teacher, Professor Ella Akritova).

Subsequently, Alina and her family ventured off into the next chapter of their lives which would be set in Canada. Alina continued performing solo and collaboration concerts all over the Vancouver area in venues, including but not limited to, the UBC Recital Hall, Tom Lee, the Convention Centre, and the Michael J. Fox Theatre. Searching for opportunities to grow as an artist, Alina began her training with Opera Soloists of the Metropolitan Opera, Perry Price and Heather Thomson in the UBC Summer Intensive Program. When the program ended, she continued training with Perry one on one several times a year when he would visit Vancouver. In 2004, she won the N.A.T.S. Vancouver Chapter songfest and performed at the following Gala concert.

Working towards a more diverse and refined operatic repertoire, Alina had been learning and developing a wider range of European, Russian, Armenian, and Ukrainian music. In 2006, touring all over Stuttgart, Frankfurt, and Dietzenbach, she would take this newly polished repertoire and perform it at multiple solo concerts. Upon her return to Canada, she began intensive training with Professor of Riga State Conservatory, Ludmila Brown, another infamous and sought-after ex-Soviet Opera singer. After a year of rigorous training, Alina would do another tour in 2007 to Germany due to the highly enlightened and adoring response from the German public, especially for her Armenian music repertoire.

The years following her final tour to Germany, Alina shifted her focus towards teaching and performed less. Eventually, she realized that the burning passion and enjoyment she received from singing and performing never left her heart. So in 2017, she shifted her focus back towards performing in collaborative and solo concerts. Her unique voice has received many compliments as that of singing birds and bells. More recently, her beautiful light voice has developed gracefully with a soulful dramatic edge. Being fluent in 4 languages, she is most known in the community for her diverse multicultural repertoire, especially her Armenian repertoire.